Why Would You Refuse Fame and Fortune? 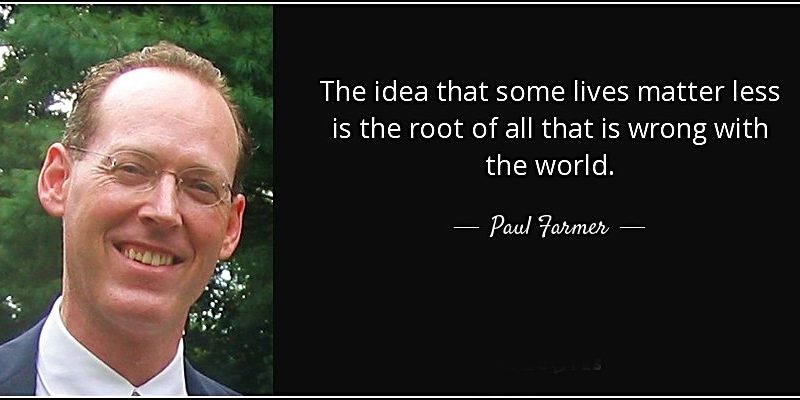 Why Would You Refuse Fame and Fortune? Dr. Bill Nichols

A top news story of the month, June, 2015, from Forbes spotlighted renowned physician Paul Farmer for his selfless service to the poorest of the poor.  As an outstanding specialist in infectious disease, he left the prestigious halls of Harvard Medical School to do something surprising. With his credentials, he could have climbed up the social ladder to comfort, ease and wealth. Instead he refused fame and fortune and chose to climb down the social ladder to experience disease, frustration, suffering and poverty. That’s not the American dream. Why would anyone do that?

The Root of All That’s Wrong

When you read the bold banner at the top of his web site, “Health is a Human Right,” you quickly understand why Farmer chose the rough road over the easy road. Ever since he helped found his nonprofit organization called Partners in Health, Farmer has proclaimed that his mission is both medical and moral. He insists that “The idea that some lives matter less is the root of all that’s wrong with the world.” Farmer is determined to right that wrong.

What If It Were Your Family?

For years, through his words and life, Farmer has restated and reapplied the biblical golden rule by saying, “When our patients are ill and have no access to care, our team of health professionals, scholars, and activists will do whatever it takes to make them well—just as we would do if a member of our own families or we ourselves were ill.”

How Could a Just God Permit Great Misery?

Over the years, Farmer has struggled with the ancient question, “How could a just God permit great misery?” He answers the question with an old Haitian peasant proverb, “God gives but doesn’t share.” According to Tracy Kidder, the Pulitzer-prize winning journalist who spent time with Farmer, the proverb means, “God gives us humans everything we need to flourish, but he’s not the one who’s supposed to divvy up the loot. That charge was laid upon us.” Kidder is an American author, who is best known for his Pulitzer Prize-winning The Soul of a New Machine and Mountains Beyond Mountains: The Quest of Dr. Paul Farmer, A Man Who Would Cure the World.  This is a great book worth your read.

200 Billionaires and Other Leaders Honor an Humble Doctor

In light of his sacrificial and unprecedented medical and moral achievements on behalf of world’s poor, Farmer received the internationally-famous Forbes 400 Lifetime Achievement Award for Social Entrepreneurship. On June 4 of this year,  200 hundred billionaires, national leaders and social entrepreneurs gathered at Carnegie Hall in New York during the fourth annual Forbes Summit on Philanthropy to recognize Farmer and discuss ways to help people like those Farmer serves.  He, who turned his back on fame and fortune, was honored for his choice.

Is the Good-life at the Top or the Bottom?

Through the media and other ways, our culture says the best direction to go in life is up the ladder to success.  The good-life is at the top. It’s being in the limelight, being center-stage, being out front, being rich and famous.

The way of our Lord is the opposite. His way is radically different.  His way chooses to go down into the valley, where people suffer, rather than to go up where people have more than they need. His way says that the good-life, the best-life, is at the bottom not the top. It’s choosing to be out of the limelight but in the shadows with those who live in darkness. It’s being back-stage where the hard work is done without applause. It’s taking less that others might have more.

Which Way is the Best Way?

Why is the Lord’s way the best way? Ask Paul Farmer. I think he would say, “Do unto others as you would want them to do for you.” The Lord’s way is the way to the Kingdom of God, the way Jesus took. It’s the way that brings everlasting life. The apostle Peter said it this way, “Humble yourselves, therefore, under God’s mighty hand, that he may lift you up in due time.” – I Peter 5: 6 (NIV)

Tell me about someone you know who chose the way of the Lord.

What small act can you do to be a part of the humble way?