Rioting. What Would Jesus Say? 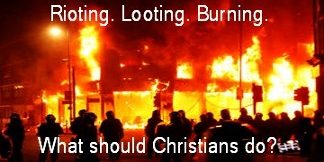 Rioting. Looting. Burning. That’s what it takes to make change, according to some. Are there circumstances when resorting to violence is the right thing to do?

Our nation is on fire again. In the last several days, violent and peaceful protests are taking place in every state in our country following George Floyd’s shocking death in Minneapolis. How should we Christians respond? What would Jesus have us do?

Echoing the voice of Martin Luther King, Jr., John Lewis, the U.S. Congressman from Georgia, responded to the current outbreaks by writing, “Rioting, looting, and burning is not the way. Organize. Demonstrate. Sit-in. Stand up. Vote. Be constructive, not destructive. History has proved time and again that non-violent, peaceful protest is the way to achieve the justice and equality that we all deserve.”

I’ve seen it periodically in my lifetime, something explosively dramatic happens that forces us to stop, step back, and ask ourselves those two foundational yet often ignored questions, “What is right and what is wrong in this situation?” When these occasional highly-emotional and morally- foundational challenges explode in our normally-complacent lives, I like to look back in history to see how others responded to similar circumstances and what the outcomes were. But I also like to look back on how Jesus responded to such watershed events.

Over a relatively short time, Jesus developed a large following that faced an even larger unjust, bigoted, self-serving group of political and religious leaders. Nevertheless, Jesus never called his followers to gather in mass to riot, loot, burn or destroy. But he did call them to a radically new, pro-active, highly-effective and transformative alternative to violence.

Through his unique response, first century Christ-followers were able to see remarkable changes in the lives of individuals and communities. Jesus borrowed the ancient Greek word Ekklesia (pronounced Ek – kla – SEE – ah) to label his unconventional response to evil and injustice. Jesus and his followers used this creative word to represent an invitation and challenge to the common people of Jesus’ day.

The Greek word Ek means “out of” and the word klesia means “to be called.” So, the two words together made one word, Ekklesia, denoting people who were called by God and who accepted the risky choice to step out of the crowd and unite with other called-out followers of Jesus to carry out his mission on earth.

The first time the Gospel writers tell us that Jesus used the word Ekklesia was in Matthew 16:18. Here he made the historic announcement as to his new way of transforming individuals, society, and the world. Jesus did not just talk Ekklesia, he modeled it. He began by calling just twelve men, most of whom had little or no formal education or experience in leadership.  He called on them to step out from their comfortable communities, their families, their jobs and unite with him to transform the entire world. His plan was an unconventional and counter-cultural strategy led by common, ordinary people, like Simon Peter—a fisherman, whose life was changed by following Jesus.

Jesus personally demonstrated his strategy by reaching out to people one-by-one. He always initiated his mentoring by inviting his insecure, unlikely apprentices to be his friends. His offer was an unclear, precarious, walk-with-me kind of invitation. He showed them how he personally related to society’s most broken, mistreated and abused, but also to its richest, strongest and most powerful.

Then Jesus went beyond showing them how to effectively respond to individuals. He revealed a whole new way of confronting their most corrupt, immoral, and self-serving religions and political organizations and even the hateful, violent mobs.

Sometimes when I see the injustices and demoralizing plight of America’s poor and marginalized, I find myself asking how can this unimaginable wrong actually exist in such a wealthy country. And I get the feeling that we’re caught up in the same kind of selfish, destructive culture of those early disciples. I feel like the poorest and weakest among us are powerlessly controlled by similar predatory, self-serving individuals and institutions. There seems to be no way out. I find myself thinking, “It’s just the way things are.”

Then I remember that little band of fishermen, farmers, and carpenters and a doctor who accepted Jesus’ invitation to become part of his Ekklesia. Taking on Jesus’ servant-attitude and his do-unto-others-as-you-want-others-to do-unto-you response to evil and injustice, those early Christ-followers were empowered and rapidly multiplied, becoming so large and impactful that the leaders of the Roman empire considered them a major threat.

The once tiny, powerless Ekklesia began to unselfishly share their resources, enjoy a simple lifestyle and choose the nonviolent, pro-active, self-sacrificial approach of their Lord. They primarily aligned themselves with the poor and marginalized rather than the wealthy and powerful. Like building any relationship, the Ekklesia approach took time and patience, but it worked.

When the Bible was translated into English, the word Ekklesia was translated church – the original name for groups of people who chose to become Jesus-followers, changing their purposes in life and carrying on the transformative work of Jesus. Unfortunately, over time too often the churches in many neighborhoods became something other than the Ekklesia Jesus started. They became more a reflection of the culture rather than a transformative influence on the culture.  But occasionally we see glimpses of the true Ekklesia. If you look closely, you can find it alive and healthy today. Nicky Cruz’s story is a good example.

Nicky grew up in an abusive family in Puerto Rico’s poorest, most dangerous ghetto. As a child, he was constantly in so much trouble that his parents sent him to live with his brother in New York City. By the time he was fifteen, he ran away, lived on the dark streets of the city, and joined the Mau Maus gang, one of NYC’s most brutal and notorious street gangs. Cruz was such an angry, fierce, and violent young man that within six months he rose to be the gang’s Warlord.

While making his rounds, Nicky saw a young man named David Wilkerson preaching to some of Cruz’s gang members in the Gang’s territory. Cruz broke through the crowd and interrupted Wilkerson’s sermon. He proceeded to punch Wilkerson in the face and told him to stay out of his territory. Wilkerson responded by telling him “Jesus loves you and will never stop loving you.”

Cruz retorted by threatening to kill him if he came around again. Through Wilkerson’s patient and persistent witness, heeventually organized an evangelistic meeting in a boxing arena in the neighborhood. When Cruz heard about it, he took a group of gang members with him and headed to the building where Wilkerson was leading the meeting.

Cruz later reported that during the sermon, he felt guilty about his past and wanted to talk to Wilkerson. At the close of the sermon, Wilkerson gave an invitation for people to step out of the crowd, come forward for prayer and give their lives to Jesus. A large number of the Mau Maus gang members responded. After the service, Cruz himself went backstage. Wilkerson prayed with him, and Cruz gave Jesus his life.

A few days following their conversions, the new Christ-following gang members went to the local police precinct and turned in all of their bricks, guns and knives. The officers were shocked. They had never seen anything like it. Over time, Cruz helped Wilkerson grow the now famous Times Square Church in Manhattan, where thousands of street people and others come to help one another and band together to serve their unique community.

I have visited that Ekklesia. It’s not your normal church. But then, a true Ekklesia never is. The Times Square Ekklesiais a gathering of thousands of volunteers who now work in over forty ministries, ranging from feeding the homeless in New York City to staffing an orphanage in South Africa.

David Wilkerson and Nicky Cruz have both written books, such as Cross and the Switchblade, telling their stories. They both emphasize how they were committed to reaching out to what some would say was an impossible, unreachable community. In those days, Times Square was known as the most immoral neighborhood in the country, filled with businesses pushing X-rated films, strip clubs, prostitution, and drugs. Wilkerson described his prospects as pimps, runaways and crack dealers who needed help and needed Jesus.

When that radically caring and committed young preacher reached out to the poorest and most rejected of New City, he knew he was doing so in the shadow of many of the richest and most powerful institutions in our country. He had to decide on a strategy. Would he rally the mistreated and beaten down and motivate them to riot, loot and burn? Or, would he choose the Ekklesia way?

Violence is the I-want-it-now approach. It appeals to our fast-food, high-speed internet, instant gratification culture. But its results are short-lived and destructive. Wilkerson chose Jesus’ radically different way. Yes, it’s slower and doesn’t get much press, but it’s lasting and produces changed lives. It’s not just a way to satisfy our pent-up fury and frustration. It takes hard work and patience. But it’s worth it. The Ekklesia way transformed Nicky Cruz, his friends, others like them and neighborhoods and more.

When you see the rioting, looting, and burning in our day, remember, there is a better way. Be proud to be a part of the true Ekklesia and keep on organizing, demonstrating, speaking out, standing up, voting, being constructive, modeling the Jesus way. More than likely, you won’t be recognized, appreciated, or rewarded on this side of heaven. But that’s okay. That’s not why you’re doing what you do anyway. You’ll know you are part of a movement that is pleasing your Lord, doing what’s right, following Jesus’ strategy and example of helping people and changing lives. And after all, isn’t that what counts most?

Categories: Encouragement and Faith, Purpose and FaithJune 5, 2020
Go to Top