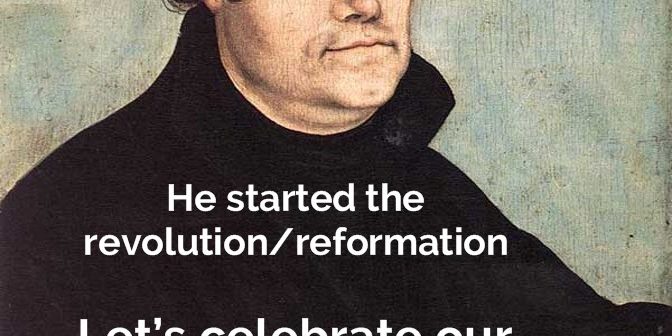 I know I’m in a miniscule minority, but hear me out for just a minute. I believe what happened 500 years ago on this very day was a world-changing event. The truth is, what started that day continues to impact our lives far more than all the other things you’ll see in the news today.

Even though what took place on that October 31, 1517 changed history and especially the Christian faith, it will be overshadowed by the current politics in Washington, the world series, and yes, American’s $9 billion celebration of Halloween.

What we should be doing is having concerts, fireworks, parades, speeches, and other festivities like we have on America’s celebration of its Declaration of Independence on the 4th of July. Why? Because today is the 500th anniversary of Christianity’s “Declaration of Spiritual Independence.”

On that pivotal day, a little-known priest risked his life and soul for truth and spiritual freedom for everyone. And God used his act of faith to start what we now call the “Protestant Reformation.” When Martin Luther nailed his revolutionary document to the door of his church, he started a spiritual fire that spread around the globe.

In 95 statements (his 95 theses), Luther took a bold stand for one all-important truth – faith in Jesus alone can set you free. That truth was simple yet profound. It contradicted the commonly accepted teaching of the church of his day.

Luther’s radical, “faith alone” message proclaimed to the religious leaders of the largest church on earth at that time and to most other religions, “You’re wrong. You’re not telling the people the truth. No one needs a church, a holy man, a religion or anything else on earth to get God’s forgiveness and acceptance.”

Luther’s explosive message incited the minds of religious leaders and common people. He insisted that no matter who you are or how far you have strayed from God, you can come alone to God. All he wants and requires of you is faith in Jesus alone. That’s it. Nothing else.

Because Luther stood up for the truth, he paid a severe price. He was kicked out of his church, told he would go hell, and shunned by his friends. Luther’s response was simple, “Here I stand. I can do no other.” He stood on God’s word and the Spirit of God speaking to his conscience.

Since that day, thousands of other men and women have taken their stand, risked their lives for this great truth, and helped now billions of people find Jesus as their personal Lord and Savior.

As it was in Martin Luther’s day, so it is in our day. What’s true and right according to God’s word is not popular. We live in a day when tolerance is valued more than God’s word, personal choice more than personal obedience, and individual rights more than family values.

The truth is, what’s true and what’s right never changes. They are as unchangeable as God’s physical laws. You may choose to go against them but you won’t break them. They will break you. If you follow them, they help you become all that God designed you to be.

That’s what Martin Luther did. He chose to accept God’s word alone as truth. No additions, no subtractions, no changes. That’s exactly what we need to do in our own personal lives, families, and country.

And, sometime today, on this 500th anniversary of our “Declaration of Spiritual Independence,” stop and tell your Savior Jesus, “Here I stand. I will do no other. You alone are my salvation, my hope, my joy, and my eternal life. To you alone, I look for what is true and right. Thank you, Jesus.