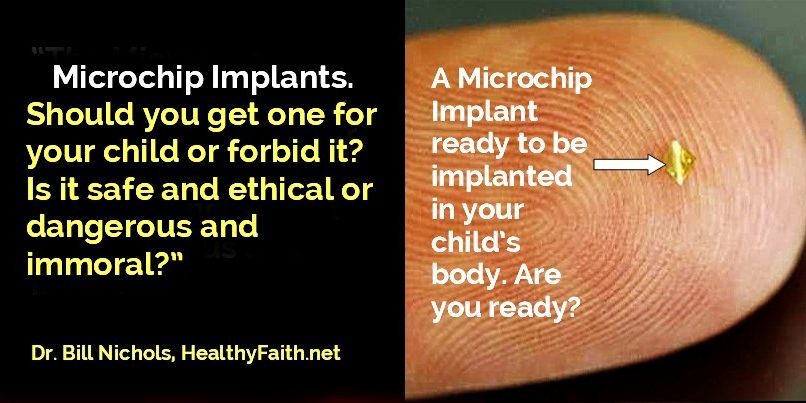 Microchips are no longer just for laptops and phones.

With so many amazing discoveries in medicine these days, I don’t get overly excited about one anymore. Well, that was until one invention made its debut with such a jolting impact that it just may be the beginning of a whole new era in the medical world.

I was fascinated when I first learned about this tiny gadget that’s causing such a paradigm-shift. And to think, the world-wide impact can be so large when the electronic device is so small—slightly larger than a pen-head. It’s called a microchip implant and can be surgically inserted into our bodies so that it accomplishes futuristic-sounding achievements.

Although in its infancy, the small chip can already cure some previously incurable major diseases, help individuals overcome significant emotional problems, keep our children safe by letting us know where they are at all times, track criminals, restore lost memory to people who suffer traumatic head injuries, and store our entire medical history in case of an emergency.

Just imagine how you would feel if, through a simple insertion procedure, your child or spouse could overcome Parkinson’s, Alzheimer’s, a seizure, stroke, schizophrenia, deafness, or blindness?

To put it bluntly, who wouldn’t want to simply implant a microchip into a deaf child’s ear so she could hear for the first time in her life? Who wouldn’t want to protect a child with life-threatening diabetes from a deadly emergency by merely implanting a chip? Sounds like a no-brainer. Right?

When I first read about the medical, therapeutic, and prosthetic uses of microchip implants, the stories sounded like science fiction. But, when positive articles about the device began to appear in some of the most respected medical publications in the world, I knew microchip implants were real.

For example, a report published in the New England Journal of Medicine revealed that a microchip implanted in the brain significantly helped Parkinson’s patients, and neuroscientists believe this is only the beginning. I realized that science and faith leaders were about to confront a whole new set of astounding opportunities, serious challenges, but also crucial moral decisions.

When any new medical breakthrough comes on the scene, healthcare researchers, business leaders, theologians, and ethicists are always nervous. It’s our moral and professional responsibility to thoroughly test the benefits and discover the potential dangers of the new product.

Although those of us who serve hurting people are hopeful about the progress made through the use of microchip implants, we must not jump to the conclusion that we’ve uncovered the long awaited “holy grail” of medicine. It’s our job to be extremely cautious, even suspicious. We must approach all new medical inventions like a possible technological Trojan device. On the surface it may look like a blessing, but hidden within it could be something that will be a crippling moral curse for individuals, families, and society?

Those of us who have accepted these responsibilities all want the enormous, positive benefits of such new inventions. But, just as much, and maybe more, we consider it our duty to be certain that new products are safe; and that individual’s and society’s rights, dignity, morality, and overall well-being are protected.

It’s only been a little over six years (2009) since the first company in the United States, VeriChip Corporation, received preliminary approval from the Food and Drug Administration (FDA) to market its microchip implant device in the U.S. Since medical microchips have such a brief history, many of us have serious questions about their use.

What are some of the potential dangers of microchip implants?

The more I examine the potential dangers of these devices, the more questions surface. Questions like:

What’s the bottom line? Are medical microchip implants worth it or not? When I started my examination of this amazing, new, little device, I quickly concluded that it can be a blessing and a curse.

As a minister, counselor, and patient-advocate for many years, I’ve discovered that there are many highly respected medical experts, neuroscientists, psychologists, and ethicists who are not so quick to join the microchip bandwagon.

Although some predict the microchip implant industry could gross over eighty billion US dollars within ten years, many believe no form of the new technology should be used until it is thoroughly tested under the same responsible scientific standards as any other potentially dangerous new invention.

On top of thorough scientific scrutiny, I believe the new technology has such potentially dangerous effects on the quality of life for individuals, families and society, it must never be used until it is comprehensively examined and regulated by agreed upon Judeo-Christian moral standards. No medical, financial, or technological authority should be allowed to evaluate itself in terms of the moral guidelines for the use of this powerful technology.

We are responsible to others, society, and, above all to God.

There is no doubt that microchip implants can be a blessing or curse. To make sure they are a blessing, we must insist that any use of implants be respectful of people’s privacy, dignity, human rights, spiritual worth, and freedom. We must protect even the weakest and poorest of individuals, families, and groups from being controlled, threatened, or manipulated.

As I said at the beginning of this article, the new, medical microchip implant technology has ushered us into a new day of hope and fear. For me, it’s a great day of opportunity for humankind and an even greater day of responsibility for us who are committed to serving our Creator, who made all these blessings possible.