I Was Scared to Death in the NYC Subway 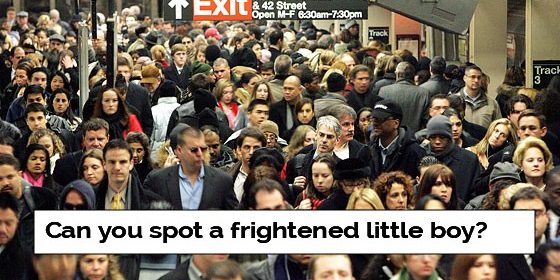 Ever feel separated from God? It’s a common feeling. It’s that estranged, anxious feeling we sense when we let something come between us and God.

When I was ten, my dad took me to New York City. We visited popular sites like the Empire State Building, Statue of Liberty, and Circle Line Tour.  My most memorable site was the subway.

It was memorable, not because it was amazing or enjoyable, but because I almost lost my dad at that subway station. As we waited for the next subway car, My dad warned me, “Bill, stay right beside me because the train stops for only a few seconds. We’ll have to jump on before the door slams shut and the train takes off.”

You guessed it. I didn’t stay close to him. I got distracted. The next thing I heard was dad calling from inside the train. “Hurry, Bill. Get on before this thing leaves.” He and another man held the door to the train open about six inches. It wouldn’t take off until the doors all shut.

I was scared to death. I felt like I had lost my dad forever. I could imagine myself, a ten year old, country boy, lost in the largest city in the world not knowing where to go or what to do.

One of the four primary characteristics of Jesus is he is “Always Present.” When you feel separated from him, you are not. When you feel alone, you are not. He never abandons his children, not for one second. He promises that nothing can separate you from him.

Through his word he says to you, “Neither death nor life, neither angels nor demons, neither the present nor the future, nor any powers, neither height nor depth, nor anything else in all creation, will be able to separate us from the love of God that is in Christ Jesus our Lord. —Romans 8:38–39

Any time you begin to feel the least bit fearful or alone, do what Jesus said to do, “Abide in me.” John 15:1-2. To abide in Jesus is to stay close to him, to see yourself as being right by his side. Don’t wander away from him. But if you do, immediately turn back to him and say this healing prayer: “Thank you, Lord Jesus, for always being with me, no matter what.”

By the way, I did squeeze through that six inch crack in the subway door and, you won’t be surprised to know that I didn’t leave my dad’s side for the rest of my New York trip.

Special Note: If you wish to learn more about how to have an intimate relationship with God, take a look at my new book, HEALTHY FAITH: A Strategic Lifestyle Plan to Transform Your Head, Heart, and Hands. You can look inside free http://amzn.to/1rPB0On

Categories: Encouragement and Faith, Purpose and Faith, Relationships and FaithAugust 19, 2016
Go to Top