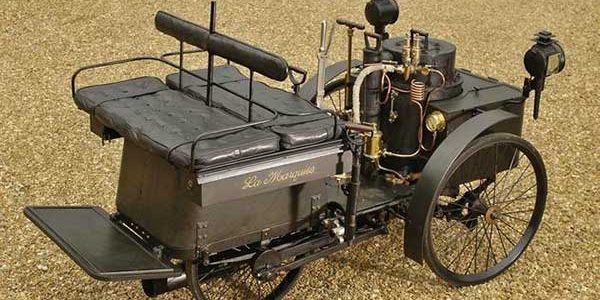 The oldest running car on earth is the 1884 De Dion Bouton et Trepardoux Steam Runabout. Recently, that first-step vehicle sold at an auction for $4.62 million making it the world’s most valuable automobile. Young Comte de Dion and his friends built it in an old garage in the back of a toy shop in Paris. When completed, the car sold for $540.

Those young inventors had no idea that what they were doing would have such an amazing impact on the world. That’s usually the way most big ventures begin. They start with small, seemingly insignificant steps. The same is true for developing a healthy faith.

Jesus walked on water. Jesus’ disciples sat safely in their boat when they saw Jesus coming toward them on the water. At first they thought he must be a ghost. They were terrified until they heard him say those unforgettable words, “Take courage! It is I. Don’t be afraid.” (Matthew 14:27) Peter did exactly what Jesus said. He acted on faith and took courage when, in faith, he stepped out of the boat and was able to walk on the water to Jesus.

Faith is an act of courage from the heart. The word courage comes from the Latin word cor, which means “heart.” A courageous act is an act of faith. It’s a wholehearted act. It is more than a belief. It is a commitment of our entire self—our beliefs, feelings, desires, and behavior.

Jesus is calling you today to “Take courage.” That is, he wants you to step out of your safe boat onto some troubled water. He wants you to look around the storms in your daily circle and find someone who needs the hand of God—a  lonely, elderly woman, a fearful young man, a discouraged friend, or any number of others. Since God’s Spirit lives in those who give him their lives, he wants us to be his hands, his instruments of grace.

Start small and see what God will do. Is it possible that our miraculous God could take your seemingly insignificant act of courage (faith) and transform it into the next spiritual Trepardoux Steam Runabout? That’s exactly what he loves to do.

Categories: Encouragement and Faith, Purpose and FaithFebruary 12, 2016
Go to Top