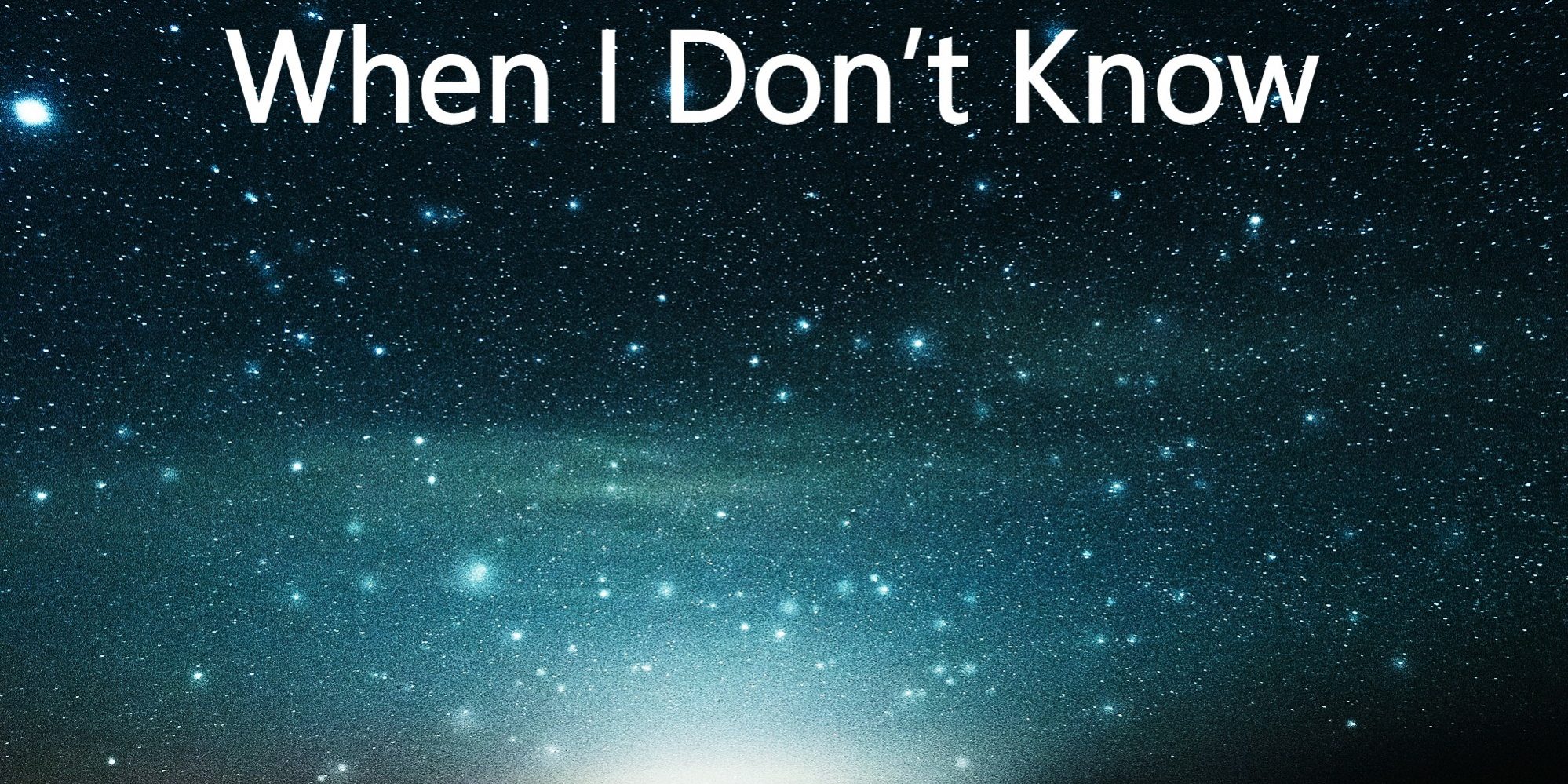 Don’t you just hate answering important questions with, “I don’t know”?  And when the questioner, who is out to you for help, is facing something painful or fearful, the they want to hear is “I don’t know.”

“Why did God let our baby get cancer and die?”

I remember that young couple who looked to me, their pastor, with hopeful anticipation.  “Why did God let our baby get cancer and die?” I didn’t want to say what I knew to be true. It seemed too cruel, too harsh. Maybe I should just tell them God had something special for their baby to do in heaven. After all, what kind of a person could tell a brokenhearted couple those three awful words, “I don’t know.”

Maybe we loathe admitting we don’t know things not only because it feels so uncaring but also because we equate not knowing with not being intelligent. Could it be that we fear people thinking we’re ignorant because smart people are supposed to know things? Or that they feel we’re uncaring because we don’t give them a satisfactory answer?

After years of thinking and feeling that way, I came to realize I had this I-don’t-know-thing all mixed up. It turns out, the opposite is true. The more time I spent with friends and family facing life and death questions, the more I discovered that acknowledging “I don’t know” is not a sign of being uncaring or unintelligent at all. It’s a sign of being honest, humble and encouraging.

What turns non-believers off more than anything?

Saying ‘I don’t’ know” is a welcomed way of participating in others’ pain and humanity.  It’s a pledge to be brutally honest with ourselves, others and God. It’s a rejection of hypocritical religion that rightly turns off non-believers and eventually makes .

What are the two levels of knowing?

We all experience two levels of knowing. The first kind is more about understanding things, separating facts from fantasy, discovering the secrets of the universe. This lower level of does brings great satisfaction and helpful information, but it can never bring the deeper, personal satisfaction we find in the kind of knowing.

The second, deeper level of is radically different and . It goes beyond making sense about things and discovering facts and gathering information. It reaching out to more than the physical. It’s that kind of knowing that can’t happen with things. It can only happen with people.

Is the one you love too complicated and wonderful to understand or explain?

For example, when I say, “I know my wife Phyllis,” I mean something more meaningful, deeper, more satisfying than “I understand her. I’ve studied her and figured her out.”  Trust me, that’s not going to happen. She’s far too complicated and wonderful to or put into words.

Knowing Phyllis means, over time, we have developed a close, personal, mutually-caring, loving relationship that can’t be fully explained . It’s the kind of knowing that completely changed my life. It’s to give my life to and for her no matter what.

That’s what happened to a blind fellow Jesus healed. He didn’t understand who Jesus was. He never could figure out how Jesus healed people, but he wanted to know. So, from a distance, he followed Jesus around until one day Jesus reached out to him and gave him his sight. The next day some religious skeptics who felt threatened by Jesus interrogated the newly-sighted man. “Who  was that man who healed you?” The fellow responded honestly, “I don’t know. AllI know is I was blind. Now I see.”

With his new sight, having been blind from birth, he looked his religious critics straight in the eyes and asked a penetrating question, “Why is it that you, who are so educated, so knowledgeable religious things, don’t know who this man is who heals the blind and calls himself the Son of God? I don’t know much. I never got to go to school. So, I don’t understand how he does what he does. I can’t figure him out. But this I do know. I am going to join his followers and get as close to him as I possibly can because I want to know him.”

Did you know it’s impossible to define faith?

Faith is a hard word to define. Like getting to know someone on the deepest level, it’s easier to describe or picture than to explain. What that blind fellow did was a beautiful picture of true faith. He saw Jesus and his followers making differences in the lives of others. So, he took a chance. He took off his old prideful clothes and put on his new humble clothes and started following Jesus.

Saying, “I don’t know” is the first and hardest step to life-changing faith. It’s not a lack of understanding that keeps us from God. It’s a lack of humble honesty. The brilliant old Oxford scholar and former anti-Christian, C.S.Lewis, who became one of Christ’s most famous followers put it simply, “As long as you are proud, you cannot know God.”

I no longer hate saying, “ know.” The truth is. It’s downright comforting because it reminds me know the One who is better than my understanding.

How do feel about saying “I don’t know”?