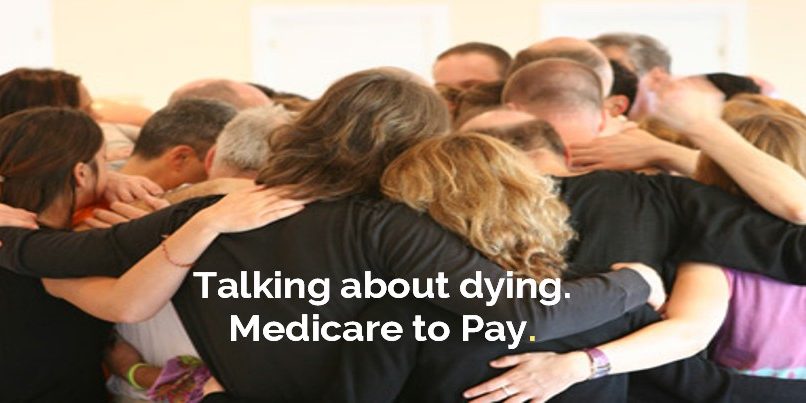 Paid for talking about dying. DO YOU THINK IT WILL HELP?

Medicare members will soon get free end-of-life counsel. Beginning January 1, 2016, for the first time Medicare will pay doctors and other health professionals to talk to families about issues related to dying.

Read this article before you decide

Theoretically, if people get end-of-life counseling paid for, more of them will seek help from healthcare workers. No one knows what is going to happen. Typically, families put such conversation off until it is too late. Recently, an excellent article in The New York Times described this unprecedented financial breakthrough for families. Some like the idea. Some think it is wrong.  Be sure to share your thoughts on this major change.

One family failed their loved one.

I remember how Harrison’s family handled this important subject. They were like most of us. Harrison was only forty-five and was never seriously ill before. His wife brought him to the emergency room because he couldn’t stop coughing and had a high temperature. The trauma team discovered he was dehydrated, had pneumonia, and meningitis. In a short time his symptoms escalated, and he lost consciousness. The family was called.

After a few days of being comatose, Harrison was pronounced brain dead. Machines kept his body alive, but his doctors told us he would never be conscious. The doctor explained that Harrison could remain in that condition for weeks, months or even longer. Some of his family wanted to remove the machines. Others refused. The struggle began.

Harrison’s family had no idea what he would have wanted them to do. As Christians, they did not know which choice was right. They turned to me as their pastor and asked me what they should do. I gave them my best counsel and explained some of the important biblical principles related to death, human dignity, and personal responsibility. After two months on life-support, Harrison died. His family felt the pain of their loss and the pain of having not talked about end-of-life issues.

Three important documents that can change everything

It is important for you and your family to have those conversations, make decisions together, and record your decisions. For no cost, you can prevent this from happening to your family. You don’t even need an attorney. All you have to do is to fill out three important documents you can get online: a living will, a health-care power of attorney, and a letter of instruction. The three forms are available at Texaslivingwill.org,

The web site was developed in part by the Center for Medical Humanities and Ethics at the University Health Science Center in San Antonio, Texas. It was developed to educate and assist you in completing your personal Texas Advance Directive. It will let your family and physicians know exactly what life-sustaining treatment you would want if you were unable to make a medical decision.

A healthy faith in God is a responsible faith.

If you demonstrate genuine faith, you use the gifts and support God provides you so that you and your family are prepared to handle all of life’s toughest issues.