Why Your Vision Will Succeed or Fail 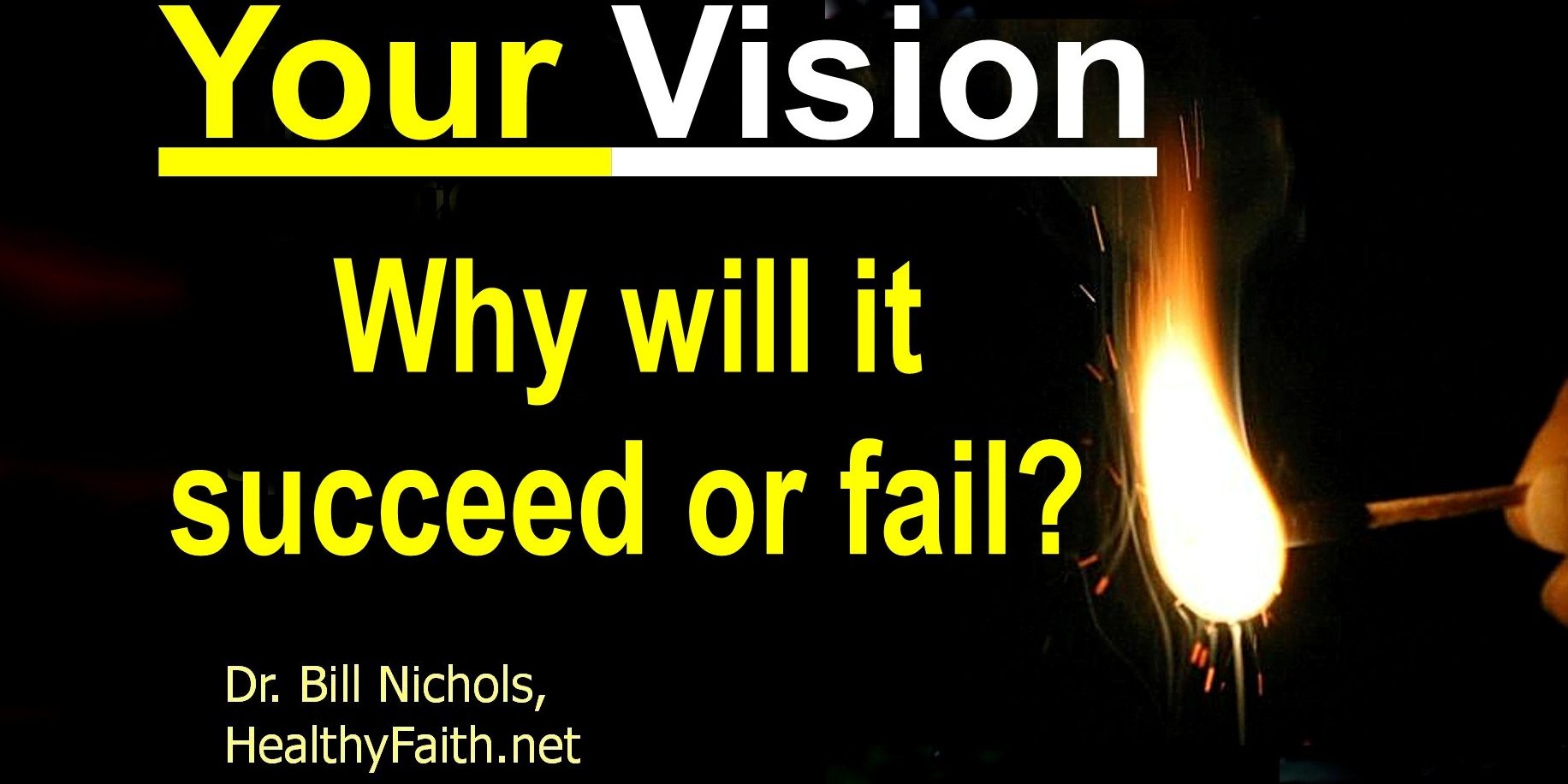 This past week a young doctor friend, fresh out of medical school and a third-year resident, drove all the way to our home in the Hill Country to tell us about his fascinating vision. If his vision actually works, it will change the lives of millions of America’s poorest citizens.

“often visions, even good and godly ones, never make it.”

Like with many potentially great ventures, there’s good news, and then there’s bad news. The good news is my friend’s vision is God-honoring, compassionate, and is supported by his excellent research and on the ground sweat-equity. The bad news is that often visions, even good and godly ones, never make it.

We all have dreams and visions about how we wish things could be. And sometimes it seems that well-meaning and Godly people have more visions than others. But, too often visions never get beyond the visionary’s head and heart. They end up in that age-old valley of dead dreams called wishful thinking.

“Why will one visionary succeed while others will fail miserably?”

However, this young physician’s vision is different. I am convinced that he has what it takes to be a one-in-a-million kind of visionary with a vision that will take root, grow, and change lives.
What makes him and his vision different? Why will one visionary succeed while others will fail miserably?

You can find any number of answers to those important questions by surfing the internet and reading dozens articles that list 10, 20, 50 or even 101 of the most important elements you need to make your vision come true.

For years, my wife, Phyllis, and I worked with people and groups to help them successful launch their new ministries. We found that many of those visionaries had read those same articles and made their long lists on how to be successful.

“the two elements that made the biggest difference”

It’s easy to get lost in long lists and forget to focus on the few critical elements that matter the most. So, years later, we looked back over all of those ministries and visionaries and isolated the two elements that made the biggest difference between success and failure.

“Get it clear from the beginning that your vision is actually not “your” vision at all.”

Allow me to explain why these two principles are so important. As a Christian, if you have a vision about a new project, new relationship, new career, or new ministry, it has a better chance of succeeding if you get it clear from the beginning that your vision is actually not “your” vision at all. What in the world does that mean?

Remember, Moses didn’t come up with a vision to set his people free from slavery. He was a convicted murderer who fled Egypt, the most powerful nation on earth. He was exiled to the desert to die. He had no hope, no army, no plan, and no vision as to how he could free his suffering family. But God did.

To Moses’ surprise, his supernatural God came up with such a humanly-impossible vision that Moses could never have even imagined it, much less believed it. And when God told Moses about his vision for his people and invited Moses to lead the venture, Moses said, “No way, not me.”

If our great, all-loving, all-powerful, all-knowing, and always-present God comes up with a vision, personally invites you to participate in His vision, and stays by your side all along the way, you can honestly tell yourself and your friends, “It’s all up to Him.” And you can be sure that you’re in on something great.

That’s what happened with William Carey, often called the father of modern missions. In 1779 in Northamptonshire, England, Carey was only eighteen when he accepted Christ as his savior. Immediately, he began studying the teachings of his Lord and was especially moved by Jesus’ command to his disciples to go into all the world.

In a short time, Carey felt God calling him to go to India as England’s first missionary. When he brought his conviction to his British church leaders, he was scolded by the Chairman, who said, “Young Man. Sit Down! You are an enthusiast. When God pleases to convert the heathen, he will do it without your help or mine.”

Carey did not sit down. He did the exact opposite. He had heard the call of God. He believed his vision was not his vision at all. It was God’s vision for India. And it was God who was inviting him to lead this great adventure. So, Carey left for India where he began a new ministry in a land with no other Christians but himself, his wife Dorothy, and their three sons.

Carey began and continued his work in India with this two-pronged commitment. He would give all of his mind, heart, and abilities to God’s vision as if its success was all up to God and at the same time all up to him.

The new work tested his commitment. It was not an easy road. It cost him more than he had expected. He experienced political conflicts, financial struggles, religious prejudice, and frequent serious sicknesses. His youngest son, Peter, was only five when he died from an illness for which they had no medicine.

But Carey tenaciously followed God’s vision through it all. He mastered the many languages of his people. He wrote dictionaries, grammar books, sermons, lessons on Christ, and forty different Indian translations of the Bible. He even personally bought one of the first printing presses so he could publish all his writings.

Carey served forty-one years in India without a furlough. He witnessed hundreds of converts. Only God can measure all that came from one young man who would not sit down and shut up but followed God vision.

God used Carey’s work as doorway for hundreds of other missionaries around the world and for building thousands of churches, hospitals, colleges, and Christian Bible schools.

By the way, that’s why I believe my young doctor friend’s vision will succeed. What about yours?

Categories: Encouragement and Faith, Grief and Faith, Purpose and Faith, Suffering and FaithJune 20, 2017
Go to Top