What I Remember About Hurricane Harvey 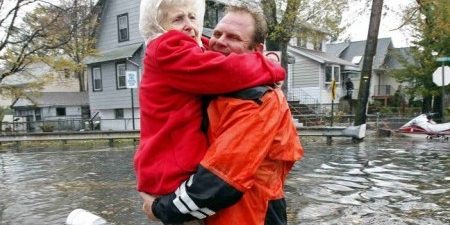 Hurricane Harvey has caused great heartache. But it has also generated great gratitude.

While I am writing this article, Texas Governor Greg Abbott just announced that already over 30,000 people have been evacuated from their flooded homes and are in shelters. He says the number will continue to grow since literally thousands are still trapped in their homes and on their rooftops.

My heart is filled with grief for the many victims of this horrible catastrophe, especially the children, elderly, and sick. At the same time, I’m deeply moved by the stream of testimonies in the media from the evacuees who talk about how grateful they are in spite of all that’s happened to them.

One woman who lost all of her earthly possessions said, “I am grateful to God that we’re all safe. We’ve lost our home, but I’m so thankful we still have what really counts.” An elderly lady, who had nothing but the clothes on her back, said, “I thought I was going to die. But I am so thankful for the young man who actually picked me up and carried me out of my house. I didn’t even know him, but I praise God for him.”

For the first time in a long time, local and national media are primarily focusing on good stories rather than bad ones. Often, hard times like hurricanes and wars do change our focus. In times like these, we want to be encouragers and not discouragers to the wounded and their families.

It’s too bad we don’t live that way all the time. If we deliberately decided to look for and share the encouraging, helpful, hopeful, and grateful stories in the midst of our misery, we would not only help those who are suffering, we would radically change our own worldview.

In Viktor Frankl’s Man’s Search For Meaning, Frankl describes one of the ways he kept from losing his sanity and committing suicide. Like so many of his fellow prisoners in Nazi concentration camps during the Holocaust, Frankl found that it was critical for him to constantly avoid the temptation to focus on the death and evil surrounding him. To help keep his fellow prisoners and himself from giving up, Frankl said he had to moment-by-moment, intentionally look for and share anything good and hopeful he could see.

Psychologists say we all have what they call “Selective Amnesia or Selective Memory.” They don’t yet know exactly why we remember some things and forget others, but they do agree that most of what we remember is what we choose to remember. In other words, if we make a deliberate decision to look for good stories and share them, we won’t forget them, and they will make a difference in our lives and others. Such selective memory is transforming.
In his letter to the Philippians, Paul wrote to the church he started in Philippi. He began his letter by expressing his sincere appreciation for them, “I thank God for the help you gave me” Philippians 1:5 (NCV)

But don’t forget, Paul had a stormy time in Philippi. It was one of his most painful experiences. While there he was beaten, humiliated, falsely accused, arrested, thrown into prison, barely survived an earthquake and was finally told by the leaders to get out of town or else.

Even with all the bad he could have remembered, Paul chose to have selective memory. He decided not to dwell on his painful past, but he chose to focus on the good things God did among the people while he was there. Philippians was his most positive, grateful and joyful letter. He said to them, “Every time I think of you, I give thanks to my God.” Philippians 1:3 (NLT)

Your way of looking at the world, your family, and even your worst circumstances is greatly influenced by the stories you choose to remember and retell. Are you still remembering and retelling old, painful memories from your past? Have you not yet chosen to turn them loose and selectively put in their place good stories? It doesn’t come naturally, but you can do it.

Paul and our Lord Jesus had plenty of stormy times in their lives – stories that could have dominated their storytelling. Instead, they each made the choice to focus on being grateful for what their Father did for them and through them in the middle of their storms.

Jesus said, “Seek and you will find.” I think part of what he was saying was, “If you look for me even in something as bad as a hurricane, you will find me right there in the middle of things with my people, and when you do, remember what happened and go tell that good news over and over again.”

What are you remembering today?

Categories: Encouragement and Faith, Relationships and Faith, Suffering and FaithAugust 31, 2017
Go to Top