No matter how hard things get, orphan Annie keeps on singing “the sun will come out tomorrow.”One of the reasons we all know and love those hope-filled words is they speak to our basic need and desire for predictability.

We all feel better when the circumstances and people around us are more stable and predictable. With so much instability and unpredictability in our world and personal lives, doesn’t it feel good to know that there are some things, like the morning sunrise, that we can count on?

Phyllis and I are fairly predictable people. Truth is, most of the time we’re so predictable some might say we’re down right boring. For example, when we get up in the morning to go for our walk in the hills, we rise at the same time each day, put on our same walking-outfits, wear our same hats, carry our same walking-sticks, same binoculars, same camera, and hike one of several walking paths. See what I mean? Like I said, we’re consistently predictable and we like it.

Come to think of it, maybe one of the reasons we like to slow down and stroll through the grove of trees where the Vermillion Flycatchers live is they’re about as predictable as we are. Our tiny, brilliant-red feathered friends are usually present because they’re highly territorial. They consistently sing their same songs, perch on the same limbs, and hardly ever wander far from their neighborhood. Well, most of them don’t.

But last week I read about a “rare sighting” of one Vermillion Flycatcher family spotted over 800 miles away from his normal habitat. Rex Miller, a longtime birder, was surprised to see, for the first time in his life, the small, unfamiliar, bright red bird in a tree near his house in Kansas City, Missouri. 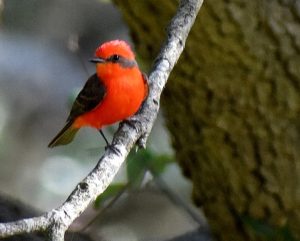 Miller knew, as he put it, he was experiencing something special. He was so excited he told all his friends and even called the District Park and Recreation field biologist. The Kansas City Star reported that the biologist “grabbed his binoculars to get a closer look,” and he and others rushed out to the area to witness this unusual family for themselves. One observer said, “We were all amazed because it’s just a bird we don’t normally see. It really made my day.”

Isn’t it an encouraging reminder that something as small and seemingly insignificant as a 5 inch, half-ounce little red bird can stir up so much excitement, get so many people talking, and bring so much pleasure to so many strangers?

As I confessed earlier, most of the time Phyllis and I like things to be dependable and predictable. We prefer order and consistency over chaos and confusion. The way we look at it is simple. God created the world to operate in an extremely orderly fashion, not out of control or operating haphazardly.

But occasionally, our loving, Creator/God does something that is completely unpredictable. Sometimes he delights us with his surprises—things like leaving the comfort of his heavenly home and surprisingly showing up in our neighborhood, or showing mercy when we deserve punishment, or rising from a tomb. God is like the wind that blows wherever it pleases. We cannot tell when he is going to come or when he’s going to go.

As I sit on our deck this morning overlooking the valley that leads up to the trees where the Vermillion Flycatcher families live, I’m wondering. Can some, small, surprising act of kindness done by one insignificant fellow in the Texas Hill Country really make much of a positive difference in someone’s life that he doesn’t know? Am I willing to occasionally fly out of my comfortable, orderly, somewhat predictable nest and be a positive influence in people’s lives?

In case you’re wondering, I’m too set in my ways to completely stop being predictable and orderly, but I am going to follow the example of that Vermillion Flycatcher family that flew out of its comfort zone. What about you?