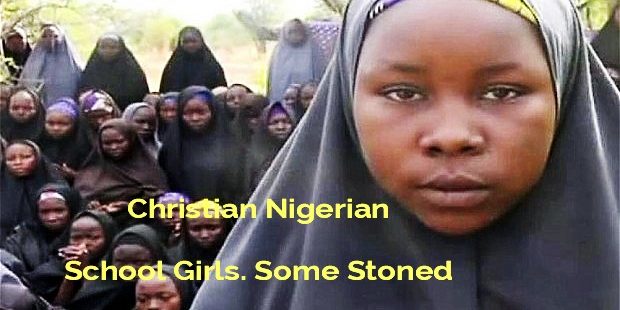 Buried up to her neck and stoned

The radical Islamic terrorists dug a hole, buried Monica up to her neck, and stoned her to death. Her father is a Nigerian pastor who was proud of his young daughter’s spiritual courage. He said, “To die for the sake of Christ, that’s the happiest thing for me. I’m grateful that she didn’t change her religion. She trust[ed] in God.”

Girls’ courage does not go unnoticed

Monica’s father said that he was grateful for his daughter, who was one of the over 200 Chibok girls kidnapped by Boko Haram. The Christian girls would not convert to Islam so they were forced to marry Jihadist or be put to death. The BBC Panorama investigation that was originally published in June, reported Monica’s death. Most people didn’t know about the girls’ courage but God notices and rewards every act of spiritual courage.

Human courage is admired for the risk. Flying the first plane, walking a cable across Niagara Falls, climbing the world’s tallest mountain, putting someone’s life above your safety are each courageous acts because people risk their lives. The purpose of human courage is to test your physical limits.

Spiritual courage is different from human courage because it is not personally motivated. Its desire is not to win a game or gain notoriety. Hemingway said, “Faith is grace under pressure.”

Spiritual courage is a gift from God for God’s glory. It’s a act of healthy faith. When you perform an act of spiritual courage, you willingly risk losing fame, fortune and even your life in order to obtain God’s “Well done my good and faithful servant.”

A family of those who have spiritual courage

Spiritual courage happens everyday by Christian who face dramatic and everyday hardships. Are you in the family of those who perform spiritual couarage?

Do you know someone who has done an act of spiritual courage?