IS YOUR FAITH MERELY MAGIC? 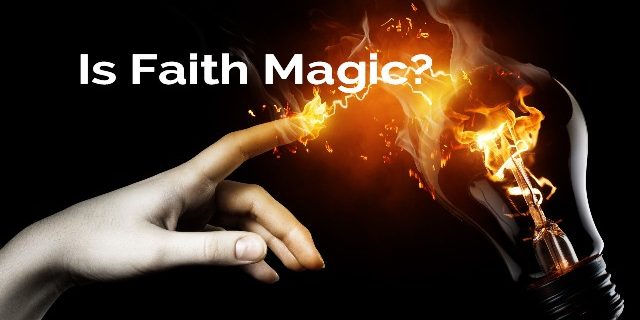 When difficult health problems or other painful crises strike, many find their faith ineffective, and sometimes virtually worthless. Why is that? Faith doesn’t work for some because what they think is faith is not faith at all.

If you feel your faith is not working, you need to reexamine your understanding of faith. If you are like Sonya, you don’t need more of the sick kind of faith you now have. You need a whole new type that works in every area of your life, including crises.

For nearly a month, Sonya sat next to Carry’s hospital bed, held his hand and prayed throughout the day and night. She had faith that God was going to heal her husband, the love of her life. She wanted a miracle, a cure for his leukemia. On the few days when Carry felt a little stronger, Sonya was convinced her faith was working. But when Harry died, she blamed his death on her lack of faith. She said, “It’s all my fault.” Her kind of faith was destined to fail.

“If I only had more faith, God would have saved Carry.” That’s what Sonya wept when she came for counseling. It was six months since her husband died and she was depressed and full of false guilt. Her misunderstanding of faith and how it works caused her constant confusion, emotional distress, and a broken heart.

Faith Is NOT Magic

For Sonya and many others, what we call faith is actually magic, not faith. Do you know what magic is and how it works? From the most primitive humans to today’s most sophisticated scientists, magic has always fascinated people. Magic is the ability to control our surroundings. It is having the power to take control, especially of those things we don’t like, and make them obey our command. That’s magic.

A magician is someone who can say the right words, make the right hand gesture and unexplainable things happen—people float, objects disappear, doves come out of hats, money appears out of nowhere, and people are magically cured.

When the Horse Runs Wild, Who Has the Reigns?

Wallace Hamilton’s, Ride the Wild Horses is a memorable picture of faith. Can’t you see the father in the saddle with his little son in his lap? The child is holding on to the reins as they walk slowly along the country trail. Without warning, the powerful animal sees a snake, leaps into the air, and gallops out of control. Frightened by the unexpected danger, the frail child tries to control the wild runaway. With all his strength, he pulls on the reins. When the little fellow realizes he is no match for his giant opponent, he hands the reigns to his father. The experienced rider wisely and firmly brings the powerful animal under his control. What a picture of faith!

When runaway, powerful crises crash into your life, turn the reins of your challenger over to the people God called and trained to help his children. He works through his helpers and wants you to depend on them—people with experience and abilities you don’t have. If your wild stallion is an out-of-control disease, trust your God-provided medical helpers. If your runaway horse is a fractured, out-of-control relationship, trust one of God’s experienced and wise counselors. Behind all of his helpers is your faithful Father. Put your faith in him because he is dependable.

Faith is depending on the truth that:

Faith is depending on God to work through you and his helpers. It is trusting that his invisible Spirit is faithfully working behind the visible scene. After doing all we can and all his helpers can, faith is ultimately placing the process and the outcome in his strong, loving hands. I’m happy to report that Sonya changed her understanding of faith and found the peace and hope she needed. Magic is a self-serving, self-deceptive illusion that appears to work sometimes. Healthy faith works all the time.What is the difference between magic and miracles?