Hawks Are Scary. Or Not? 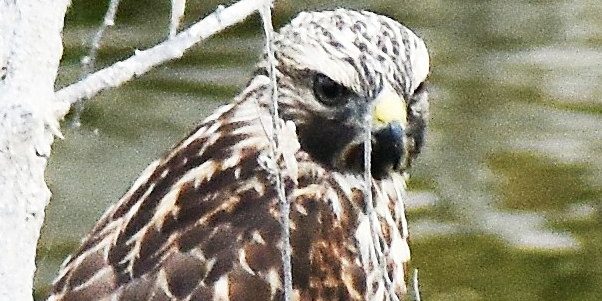 Phyllis calls our afternoon, pre-sunset walks in our Hill Country neighborhood our “little adventures.” They’re adventures because we never know what surprises we’re might encounter. Some days, our surprise is a bird we’ve never seen before. Other days it’s a big water moccasin chasing frogs in the swampy tank not far from our home.

But one element of our “little adventures” is not surprising at all. It’s quite predictable. We always return to that dead, leafless tree near the snake-tank. That’s where a huge hawk usually perches on the same high limb watching for a snake dinner. We get close enough to him to take photos, but not too close.

Hawks are scary. They have that don’t-mess-with-me look. Their super-serious scowl and penetrating stare seem to say, “Be careful buddy or I’ll swoop down, pick you up by your hair, and drag you off for dinner like I do those snakes.”
Because of their appearance and their screeching sound, I’ve always felt they were mean-spirited, aggressive, and dangerous. But after some study, I learned that bird experts say they’re actually the opposite.

Hawks are highly intelligent, extremely loyal, and unusually nurturing to their young. They can see five times better than humans and use their amazing eyesight to escape threats, stay safe, and hunt for the food God created for Hawks. They’re basically survivors whose outward appearances are misleading. 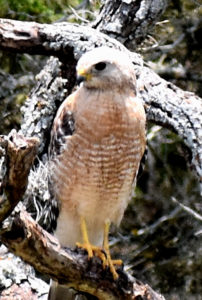 That eye-opening truth about the hawk’s appearance has been a good reminder for me of the danger of putting too much stock in first impressions. I have a tendency to judge a book by its cover. I would probably have taken one look at the empty tomb and quickly concluded someone has stolen Jesus body.

Unfortunately, the inclination to make decisions or judgments based on outward appearances is not new, and neither are our wrong and even hurtful conclusions based on our assumptions. Probably the most famous Bible story illustrating this problem and God’s solution is the story of David’s call to be Israel’s king. God sent the prophet Samuel to choose one of Jesse’s sons as the new king of Israel. Everyone thought he would choose the strongest and tallest brother.

But God’s Spirit told Samuel to not choose the most obvious son. He said, “Do not consider his appearance or his height, for I have rejected him. The Lord does not look at the things people look at. People look at the outward appearance, but the Lord looks at the heart.” 1 Samuel 16:7

God not only wanted Samuel to evaluate people and possibilities the way He does, He wants us to do the same. He doesn’t want us to value people by the clothes they wear, the kind of car they drive, the job they have, the neighborhood they live in, or the size of their bank account. He wants us to look at what’s on the inside.

God wants us to use our spiritual eyes to look for inner qualities like honesty, humility, faithfulness, love, and an unselfish, teachable spirit. As you take your “little adventure” each day, do you have any hawks you need to reevaluate?