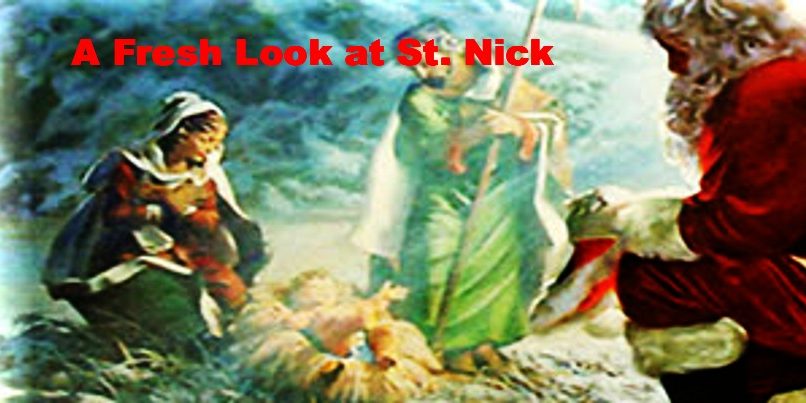 After nearly 2,000 years of looking at pictures and poems about St. Nicholas, I think it is time to take a fresh look. After Jesus was born in the little town of Bethlehem, St. Nicholas was born in the little town of Patara, Greece. It was a highly concentrated community of Christians in a country where it was not safe to be a follower of Jesus. Nicholas’ Christian parents, Epiphanius and Johanna were financially successful business people and when they died, Nicholas suddenly became a rich young man. Unlike many of his youthful friends, Nicholas chose not to spend his new wealth on himself.

When Jesus came into his life, Nicholas was transformed. While he was still young, Nicholas surrendered his life to become a minister to the poor. To learn more about his Savior, he travelled to Israel to visit Jesus’ homeland. Eventually he was ordained and became the Bishop of Myra, a town not far from his birthplace.

As a pastor, he continued to focus his ministry on caring for the poor and sick, and each Christmas Eve, Nicholas would disguise himself in a red robe and hood and deliver food and toys to poor children in his community. Like his Lord, he had a heart for the poor and sick and secretly used his money to care for people in need and especially for children.

When the crazed Roman emperor, Diocletian, began his widespread persecution of Christians and attempted to annihilate Christianity from all Roman provinces, Nicholas continued to focus his ministry on helping children until he was sent to prison for his faith.

When the new leader of the Roman Empire, Constantine, became emperor, Nicholas was released from prison and continued his ministry to the poor and sick until he died at about 80 years old.

Eventually Nicholas was made the patron saint of Russia. Over 700 churches bear his name, and the cultures of countries around the world have been influenced by his humble, unselfish, and Christ-like lifestyle.

Saint Nicholas became a central figure of our American Christmas season when Clement Clarke Moore, a Christian pastor and professor at the General Theological Seminary in New York City, wrote and published the now famous Christmas poem honoring the life of the old original St. Nicholas. The poem was first entitled “A Visit from St. Nicholas.” Later it became widely known by the first line in the now well-known poem.

T’was the night before Christmas, when all through the house

Not a creature was stirring, not even a mouse.

The stockings were hung by the chimney with care,

In hopes that St Nicholas soon would be there.

On this Christmas, if Saint Nicholas could have his way, I imagine, more than anything, he would want us to remember what motivated him to keep doing what he did in spite of the hardships he faced—it was the presence of his Savior and Lord in his life.

Nicholas got the idea of letting Jesus live through him from reading the Bible. No doubt he read that beautiful scripture, “Your body is the temple of the Spirit of God.” As a Christian, when the Spirit of Jesus enters your life, your heart is transformed because He lives in you and transforms your life as you give yourself to him day by day.

Take a new, fresh look at Saint Nicholas and then take a new look at your heart.